Has Juul Affected You Or A Loved One In Any Of The Following? 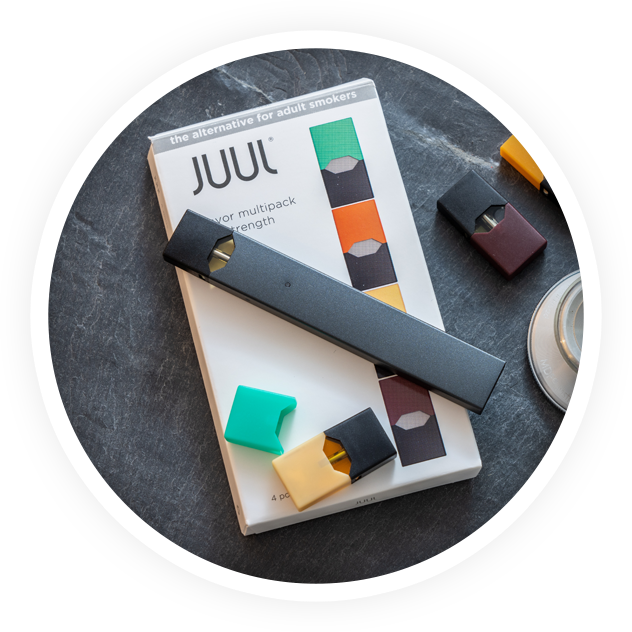 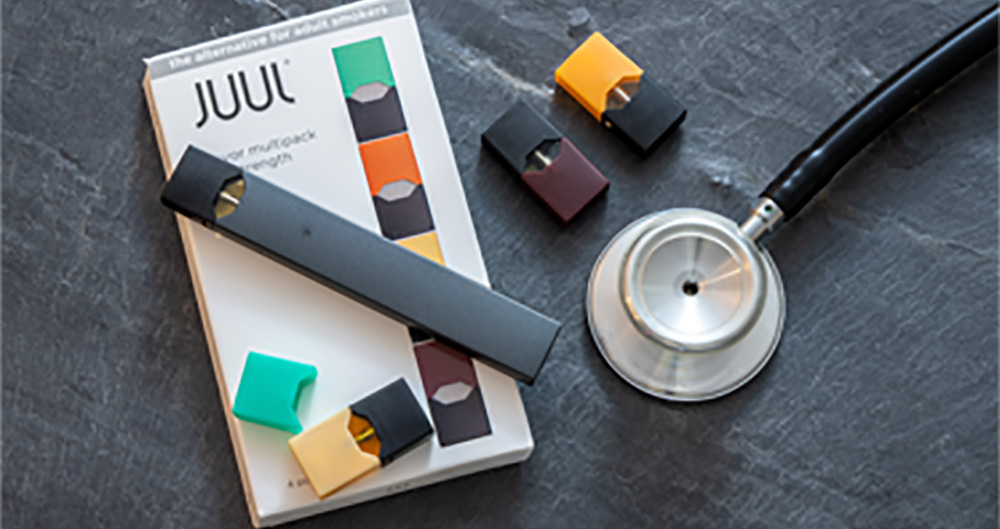 If you’ve been affected by Juul, Malman Law can help

One Of The Best Juul Lawsuit Attorneys In Chicago

When Juul electronic cigarette devices hit the market in 2017, they quickly rose to prominence as the most popular e-cigarette brand in the United States within a year., including in the Chicago area. In a short time, the company dominated the market, with 40 percent of e-cigarette sales in the U.S. However, only a few years later, manufacturer Juul Labs, Inc. faces hundreds of lawsuits involving various legal claims regarding the risks and wrongful marketing of its products.

If you are one of the many people who purchased and used Juul e-cigarettes, and you suffered injuries as a result, you should consult with a law firm handling these lawsuits as soon as possible. A product liability lawyer at Malman Law can evaluate whether you might have a claim against Juul and help determine the next steps toward holding Juul Labs, Inc. liable for your injuries. 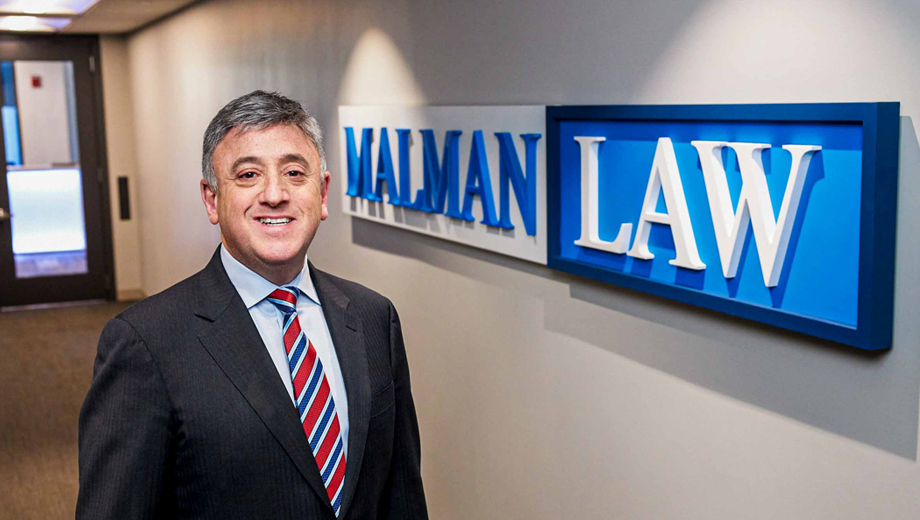 E-cigarettes are an alternative to traditional cigarettes that use electronic devices to simulate the smoking of tobacco. An e-cigarette user inhales an aerosol vapor instead of smoke, which led to the nickname “vape pens” or “vapes.” The devices are also referred to as “electronic nicotine delivery systems (ENDS).” These devices can resemble a cigarette, but some look more like pens or flash drives.

E-cigarette companies claim that these devices are less dangerous to your health than traditional cigarettes. They also advertise the devices as a method of helping people quit smoking cigarettes. However, the Food and Drug Administration (FDA) has not approved e-cigs as an aid to quit smoking, and other health experts have stated that there is not sufficient evidence that e-cigarettes are an accepted method to quit smoking.

E-cigarettes and similar products do have fewer chemicals than tobacco cigarettes, but this does not mean they are safe and healthy. Users inhale and exhale an aerosol that can contain several types of harmful chemicals and substances, such as:

Most consumers have little idea about what e-cigarette aerosols contain, and they rely on claims from companies that they are a safe alternative to cigarettes. Unfortunately, this is not the case.

While researchers are still getting to the bottom of the complete health risks of vaping, the following are some findings.

Nicotine is a highly addictive substance that can lead to a reliance on e-cigarettes. Nicotine can cause damage to developing babies when used by pregnant women, as well as hinder the developing brains of children, teenagers, and young adults. If a child swallows, inhales, or absorbs the liquid from an e-cigarette through their eyes or skin, it can lead to toxic acute nicotine poisoning.

E-cigarette aerosol contains a number of chemicals that can lead to various health problems. These can include metals, cancer-causing chemicals, particles that can damage the lungs, and more.

In addition to health issues, e-cigarettes can also malfunction and cause physical injuries. Some e-cig batteries have caught on fire or exploded while charging, which can result in serious burns and other injuries.

Are E-cigarettes Safer Than Regular Cigarettes?

E-cigarettes are considered to be safer than traditional cigarettes, but this does not mean they are safe products. While they might be an alternative to smoking for adults who are having difficulty quitting, it is not safe for young people or pregnant women to use e-cigarettes or even inhale second-hand vapor.

Researchers are still trying to discover all of the possible long-term effects of e-cigarettes. Without additional studies, people could be putting themselves at serious health risks when they use vaping products. 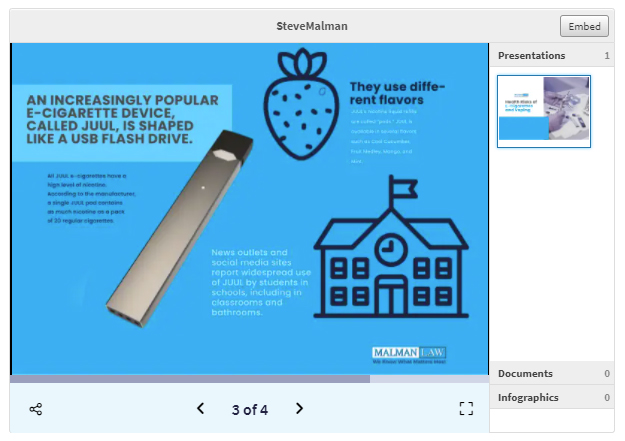 In only a couple of short years, the Juul e-cigarette took over almost half of the e-cig market. The company’s devices have a cartridge that heats up, which turns oils from the pods into vapor. Users inhale and exhale this vapor. This type of e-cigarette device resembles a tech product, such as a flash drive, so it does not appear to be a cigarette or cigarette replacement product. This vapor contains nicotine in amounts similar to a pack of cigarettes per cartridge.

The Popularity of Juul Products

In general, e-cigarettes have risen in popularity in the past decade, and the industry is expected to top $86 billion by 2025, according to forecasts. Juul makes up a significant percentage of this market, and it is by far the most purchased and used e-cigarette product.

Juul rose in popularity largely due to aggressive marketing efforts that targeted social media apps. Its ads claimed that vaping was a safer alternative to smoking, which many people took to mean the product was safe in general. The company’s marketing tactics have been heavily scrutinized as being deceptive, especially to teens and young adults who were looking for a smoking alternative. Based on this marketing, consumers might believe they are using a safe product when, in reality, vaping has its own serious health risks.

Juul has faced particular criticism for using tactics that might target or be particularly attractive to young demographic groups. This led the United States Surgeon General to issue an advisory calling youth vaping a serious “epidemic” in our country. There are different reasons why the corporation is accused of targeting young consumers.

Juul offerings include fruit flavors, such as mango, and dessert flavors, such as creme brulee, peppermint, chocolate, coffee, and butterscotch. The buttery flavors are the ones with the highest prevalence of diacetyl, which can cause lung damage.

Cigarette companies are banned from selling flavored tobacco cigarettes, but e-cigarette companies found ways to get around these bans. As a result, the comapny has been accused of selling flavors that directly attract youth to vaping. People believe that the flavor offerings are a major factor in the vaping epidemic among young people.

Cigarettes and cigarette packs are easily recognizable, and teens do not want to get caught with cigarettes. Many e-cigarette devices, including Juuls, are designed to look like tech products instead of an apparatus used for smoking. In addition, most e-cigarettes do not emit an odor similar to tobacco cigarettes, so teens might be able to vape more often without detection.

Teen Juul Use on the Rise

Since people can conceal these products easier (especially Juul devices), and they can use vaping devices without being detected in many settings, it is no surprise that youth are drawn to these products. Combine these factors with Juul’s major social media marketing efforts and the belief that vaping is safer than smoking, and the youth market was easily captured.

In response to certain initial lawsuits, Juul Labs, Inc. reduced its marketing efforts on social media and stopped selling certain attractive flavors in gas stations and other stores where they might be easily accessible to underage teens. However, this has done little to stop the meteoric rise of young vape users.

One study revealed that almost 50 percent of people who followed Juul on Twitter were teenagers. Because of the mischaracterization that vaping is safe, it has been an uphill battle to reduce teen use of Juul and similar products. Teenagers and young adults have been a highly susceptible group when it comes to Juul’s marketing efforts, and research shows that teens are a whopping 16 times more likely to use Juul than older demographic groups.

Surveys indicate that youth believe that Juul is a safe product, and about two-thirds of young users do not even realize that Juul vapors contain nicotine. Many teens are convinced that they are vaping flavor only, and before they know it, they can become addicted to nicotine and suffer the harmful effects that nicotine can have on young brains.

If your teen suffered injuries due to Juul or other vape products, you should discuss a possible lawsuit with an experienced e-cig claims attorney. There are many injuries being claimed in existing lawsuits, and our law firm can advise whether you might have a valid claim.

If you suspect that you or anyone you know has been diagnosed with cancer after the use of Juul vape, you may want to consider hiring a Juul lawsuit attorney near your location.

We are one of the best Juul lawsuit law firms in the Chicago area. So don’t wait around and contact us right away so we can go over your case and get the best possible outcome.

Answers to some of the most common Juul questions we’re asked.

“Vaping” refers to the use of an electronic cigarette, which contains a battery and cartridge that allows a user to inhale vapors instead of smoke. While inhaling vapors might be somewhat safer than traditional cigarette smoking, these vaping devices still contain many chemicals and have been linked to serious health problems and conditions in users.

Many people vape without even learning about what they are inhaling into their systems. Most Juul pods contain standard ingredients of:

What are Juul`s long-term effects?

Some long-term health effects of Juul and other e-cigarettes include seizures, serious lung injuries, increased risk of strokes or heart attack, and nicotine addiction or poisoning. Not all long-term effects have yet been realized, however, and others might be connected to Juul vaping.

What are the links between Juul smoking and cigarette smoking?

Juul has referred to its vape pens as “the smoking alternative,” which leads many people to believe it is a much safer option. While Juul products helped many people quit smoking traditional cigarettes, it is still not a safe alternative. Juul contains high levels of nicotine, so it can be just as addictive as smoking cigarettes.

What are the legal causes of action in Juul lawsuits?

There are different reasons why people are bringing Juul lawsuits, including:

What are the health effects of nicotine?

Nicotine – whether in a Juul pod or a cigarette – has many dangerous health effects, including:

Is there an age limit for a Juul lawsuit?

Many Juul lawsuits involve plaintiffs who became addicted to nicotine due to vaping while they were still minors. However, adults have also filed lawsuits regarding the dangerous health effects they experienced from vaping. To know whether you are eligible, seek help from a Juul lawsuit attorney.

Can I file a claim on behalf of my child?

If your child is still a minor and you would like to file a lawsuit based on the health effects they experienced from Juul products, discuss your options to file on their behalf with an experienced attorney. Many parents have already filed claims on behalf of their injured children.