When to get a lawyer for a car accident

At Malman Law, whether your case involves small-scale damage, catastrophic injury, or even a tragic loss of life, we have the knowledge, experience, and resources necessary to effectively pursue your claim. Call today and get our Chicago car accident lawyers fighting for you!

If you have been injured in a car accident, you should: 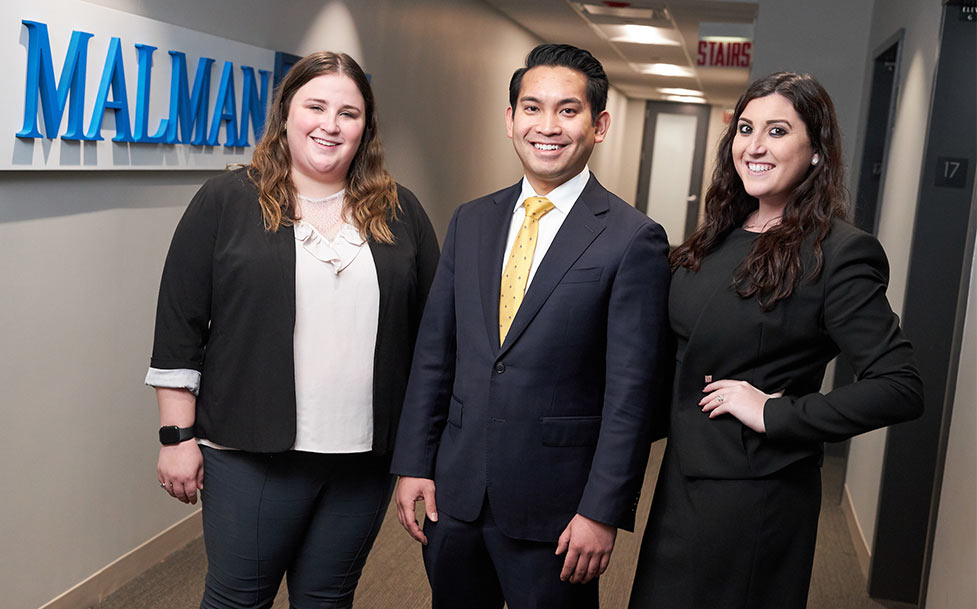 As a victim of a Chicago car accident, there are several potential reasons why you may be entitled to financial compensation. The following is a non-exhaustive list of potential grounds for filing a lawsuit against a negligent driver:

How Much Am I Entitled to Recover For My Car Accident In Chicago?

While the amount you are entitled to recover will depend on the scope of your losses, many car crash victims are surprised to learn just how much they have lost as a result of their collision-related injuries. If you contact the negligent driver’s insurance company directly, they will try to get you to settle for far less than you are owed.

In fact, both the other driver’s insurance company and your own insurance company may try to get you to sign waivers that prevent you from securing just compensation. You should not sign anything until you speak with a car crash attorney at Malman Law about your case.

How can the best car accident lawyers at Malman Law help me win my case?

A great car accident attorney possesses several attributes that are unlikely to be possessed by anyone but a highly trained professional:

Evidence collection: The most difficult part of winning a case is assembling admissible evidence. In some cases, this evidence can be surprisingly difficult to come by – the testimony of a credible expert witness concerning the amount of the victim’s future lifetime medical expenses, for example. A good car accident attorney deeply understands the intricacies and byzantine corridors of the Illinois Rules of Evidence.

Bargaining skills: Since most car accident cases are resolved through settlement, a reputable Chicago car accident attorney needs negotiating skills in order to stand toe-to-toe with professional insurance company executives who negotiate claims for a living. Not every attorney can do this, but the injury lawyers at Malman Law can.

Information processing skills: A good attorney will gather as much information as he or she can concerning the case, looking for nuances to exploit. The correlations and implications arising from a large volume of information can be immense, and a auto accident attorney needs the ability to “juggle nine balls at one time” to plan and execute an effective case strategy.

Persuasion: Ultimately, the outcome of a case comes down to persuasion – can you, or can you not, persuade the judge or jury that you are right? Persuasive ability arises partly from experience, and partly from an intimate familiarity of every strength and weakness of the client’s case. At Malman Law, our car accident defense track record speaks for itself.

Most common questions for car accidents in Chicago

What if the accident was partly my fault?

Even if the car accident was partly your fault, this doesn’t mean that you automatically lose your case. Under Illinois comparative fault principles, as long as you were 50 percent or less at fault for the accident, you can still recover damages (though they will be reduced). How much they will be reduced by depends on the extent of your fault. If the court decides that you were 25 percent at fault, for example, it will calculate your damages as it would if you were not at fault, and then subtract 25 percent from the total.

Will a DUI in my car accident decide the case?

Not necessarily, but it might. Only an experienced car accident attorney in Chicago can answer this question. The key issue when a DUI is involved is whether or not the vehicle accident was actually caused by the DUI. If you were intoxicated while driving the speed limit and a speeding driver rear-ended you, for example, it would be difficult for the other driver to argue that your DUI actually caused the accident. If the court rules that the other driver’s speeding rather than your intoxication caused the auto accident, the other driver will be liable to pay you damages, while you will be liable for nothing (except perhaps a DUI charge).

The principle of causation applies no matter how the accident happened – a defendant’s misconduct will not give rise to liability unless it actually causes an accident.

What if the defendant was driving on a commercial licence?

Many truck accidents in particular involve drivers using commercial driver’s licenses. This could affect your case in two ways – (i) how easy it is to prove the other driver’s fault, and (ii) who you can sue for damages.

Regardless of whether or not the commercial driver had been drinking, if he or she were liable for the accident and had been driving as an employee in the line of duty, you can usually sue the company for all of this liability. This could be important if the driver lacks the financial means to pay a judgment.

What if I settle in my car accident?

There are two common tactics that you need to watch out for: (i) allowing yourself to be seduced by a quick but low settlement offer, and (ii) allowing the other party to trick you into missing the statute of limitations deadline for filing a lawsuit. Indeed, you might be forced to file a lawsuit in order to beat the statute of limitations deadline. Remember that a settlement agreement can be reached at any time prior to the final verdict (even five minutes before!). This is why it’s imperative that you have an experienced Chicago car accident law firm on your side.

Should I give a statement to the insurance company?

Remember that when you are making a claim, the insurance company is your adversary, even your own insurance company, since they make money by maximizing their intake from premiums and minimizing their payment of claims. Further, insurance company adjusters, whose job it is to save their employers money, are experts in asking questions in a manner so as to induce you to make statements that they can use against you later – by denying liability altogether, asserting that the accident was partly your fault, or minimizing the amount they have to pay out on your claim.

If the other driver in a car accident was uninsured, will my statement affect my claim?

It depends. If you have uninsured motorist coverage (not required in Illinois), then it simply means that you will have to make your claim against your own insurance policy. If you don’t have uninsured motorist coverage, on the other hand, you could end up with a problem. You will likely have to sue the other driver directly, and there is no guarantee that the other driver will possess the personal resources to pay out your claim.

Of course, you might get lucky if you were hit by a commercial driver – if the other driver was an employee of the company he or she worked for (rather than an independent contractor), you will probably be able to sue the employer. You can speak with one of our experienced car injury lawyers today to find out for sure.

What happens if the insurance company denies liability in a car accident claim?

Why is it important to visit the doctor after a car accident?

Skipping a doctor visit could cost you a lot of money in the long run if it turns out that you really were injured after all. In many cases, a car accident injury will be latent, meaning that you may not experience any immediate symptoms. If you turn out to have been injured later, it will hurt your case that you did not go immediately to the doctor to document your injuries while they were still fresh.

Can I recover from emotional distress?

What are the components of a car accident claim in Chicago?

If you believe that your loved one has suffered because of a car accident in Chicago, contact Malman Law right away.

EXCELLENT Based on 1743 reviews.

roy hamilton
I was hurt in a city Transportaion van after the driver of the van drove recklessly. Alexis and Malman law got me paid fast. Thank you Alexis!!

Danielle Keating
Cory was great would recommend to others

Nia Nia
The team doesn’t take long at all to respond.

Mitra Parker
After I got hurt I called the best lawyer's in Chicago. Malman law is doing a great job on my case and I'm blessed to have the best on my side

Larenzo Simmons
Very professional, courteous & you can tell they are sincere & truly care.